Address given by Lori Oschefski
in the Gillingham Park 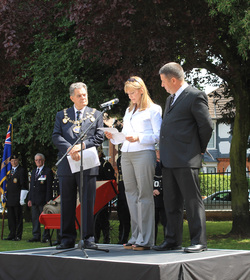 It is wonderful to see everyone here today. I thank you all for taking the time to join us in honoring and celebrating the memory of the fifteen lives lost here  on the 11th of July, 1929. A demonstration put on by the local fire department of the day had gone horribly wrong. This well rehearsed display was intended to showcase the skills of the fire brigade by staging a mock rescue of young boys from a structure built in the corner of this park. Once the children were out safely the house would be ignited as a grand finale to the summer fete. On that fateful evening, for reasons which were never discovered, the structure prematurely ignited taking the lives of nine boys and six men.

I am very grateful to the many people who have contributed towards this day - the designing of the memorial, the restoration of the graves in Woodlands Cemetery and today’s unveiling. I give you all my sincere thanks - but in particular I would like to thank the following:

The Medway Council who were quick to recognize the importance of this historic event and the injustice of allowing its significance to the local community, and the memory of its victims, to fade away to nothing. The councillors and officers of the council, Clare Lanes and Sue Harding have worked very hard these past few months in helping us put this day together. They have been wonderful to work with and I thank them very much for that.

Arc Creative Design  have designed an outstanding and fitting memorial. I could not have asked for anything better. This memorial will ensure that not only the names of these victims will live on, but also that their story will not be forgotten. It is a beautiful tribute to all those who lost their lives that day.

Technology and the Internet are amazing tools but even so, when you live 3,500 miles away in Ontario, Canada, a live person here in the local community is an invaluable asset. Elaine Nutton, our family coordinator and event planner has worked tirelessly in helping with the organization of today’s ceremonies. We owe her a great debt of gratitude for her work, this would have not been possible without her.

I would like to say a special thank you to the 5th Gillingham Scouts for their enthusiasm and help. They have shown a genuine interest in this tragedy and today's events and a genuine compassion towards their fellow scouts who died in the tragedy despite the fact that it was so long ago.  In them I definitely see evidence of the kind of spirit shown by their past colleagues, Ivor Sindon, Leonard Winn, Reginald Barrett and William Spinks.

It is wonderful to see so many family members of the victims here today. Many more would have been with us if it was possible, however, we know they are with us in spirit and they send us their best wishes.

Foremost on the minds of the victims that survived the initial fire was their family and each other. John Thomas Nutton’s final words were only of concern for the family he knew he was leaving behind. The suffering of his family and the families of all the victims in the aftermath of this tragedy is simply unimaginable.

It is bitter sweet that this tragedy, 82 years later, has given the descendents of these families the unique chance of reunion. I have watched them reconnect with each other, some after very long periods of time and some discovering hitherto unknown family members. Its nice to see that some family members have met here this weekend for the very first time,   this sad tragedy giving them a foundation for bonding and allowing them to build new family relationships.

Arthur Tabrett’s great grandchildren discovered that not only had their forefather been a fireman, but that he had died a hero giving his life freely in service. Fireman Tabrett was not trapped in the structure when it ignited, but without a single thought for his own safety he rushed inside knowing that not   only   were   the children trapped but that his best friends Royal Mitchell and Frederick Worrall were as well. Royal Mitchell, who survived an agonizing 30 hours after the fire, spoke with concern for his friends. His faithful wife Mabel, who never left his side, did not have the heart to tell him that they had perished.

Fireman Francis Cokayne, known in the community for his courage and bravery also gave his life freely in service.  The Chief Officer of the Fire Bridgde  Frederick White said that Fireman Cokayne could have saved himself, but he considered it his duty to try and save those trapped in the building, as a dedicated fireman would.  Fireman Cokayne was said to have been seen jumping from the structure with a child tucked under each arm. Indeed he  was on the roof with some of the children, when the building was engulfed in flames. This was stated in the words of a dying child, Leonard Winn.

Leonard Gordon Winn was a brave and heroic boy of 13 years. His father Gordon Winn had said "I raced to the scene of the fete in my car. My little boy, his clothes burnt and still smoldering, lay on the ground. The poor little fellow could hardly see. He was terribly burned. I lifted him gently and placed him in my car, then raced along the road to the hospital. All through the night I sat by his bed side. He was so brave - oh so brave."    Leonard lay unconscious until about 4am, when he rallied. Blinded and in agony he asked his father to sit beside him. Leonard told his father that he was on the roof with Fireman Cokayne and several of the other children. He said "Suddenly the whole building seemed to turn into a blaze. There was no time to do anything. The heat was just terrible. But I rushed to the end of the roof and jumped". That he was dying and in awful pain, was of no importance to young Leonard.  In a dying voice,  barley above a whisper he asked    “Daddy? How are the other boys? Did they get away?”.  This heroic child would pass away before his father could answer him. Leonard’s story touched me so deeply and I have often thought of him    and all of   the   other  children   and men who died,  their precious lives cut so terribly short.

The legacy that these nine boys,  six men and their families leave behind is one of tremendous   bravery and courage,    of selfless thought for others and of the great importance of our family. Its is my hope that this is how these brave souls will be remembered and the lessons we take from them as we move forth with our lives.

I would also like to acknowledge my cousin who died in this tragedy,  Eric Edward Cheesman. His father Edward, his Mother Elizabeth and his sister Molly. Eric truly is my inspiration. When I saw his picture for the first time last spring, seeing how much he reminded me of my own precious Grandson Logan, whom we nearly lost ourselves, truly brought home just how precious these lost lives were, how tragic and heart breaking their loss was and how much these children and men deserved to be honoured and remembered.  On behalf of myself and their family members, we thank this community today for making this happen.