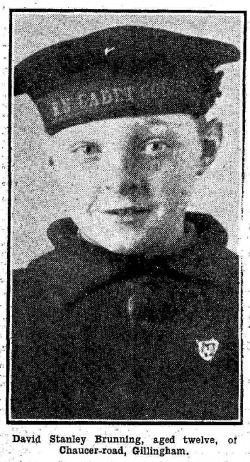 David Stanley Brunning was the only child and son of David Joseph Brunning and his wife Charlotte Ann Woolnough.  The family was living at 111 Chaucer Road in Gillingham at the time of the tragedy. David's paternal grandparents were Joseph Brunning and his wife Emma Case. His grandmother had passed away a year before David's tragic death, his grandfather on June 13, 1929just weeks before. David had several paternal Aunts and Uncles including Joseph, John, Harry, Henry, Emma and Maude.

David was a naval cadet joining to corps nearly four years before his death.  He was a student at the Byron Road School.  David was a keen swimmer and apart from the Cadet Corps he made a hobby of drawing and painting.  He had been eagerly looking forward to camp to which he was to be going in a fortnight's time from the fete.  He had already prepared, with his mother's help, all hiskit and camp necessities. Sergeant Neech of the St John Ambulance Brigade had rushed into the flames about brought out David as well as Ronald Mitchell. His mother Lottie (as she was known) was present at the feta and witnessed the fire which took her son's life.

Mr. Brunning was a joiner in the Royal Navy serving in H.M.S. Canterbury at Torbay and on being summoned by the Commander-in-Chief arrived home the day after his son died.  Mr. Brunning gave testomony in the inquest.  He had just started when in shock and disblief asked to have another look at his son before he could identify his body. David was one of the children carried on a gun carriage at the funeral.

David's father passed away suddenly while in service in Hong Kong in 1932, his mother in 1945. Both of his parents would be buried beside him in the Woodlands Cemetery. 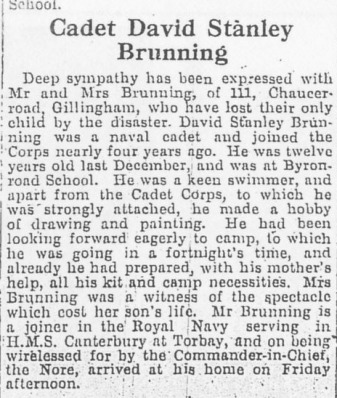 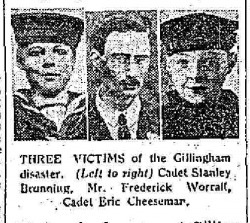 Flowers left on David's grave by the 5th Gillingham Scouts during the July 10th 2011 Commemoration Ceremony. Small wooden cross made by Phil Oschefski and placed by his daughter Lori 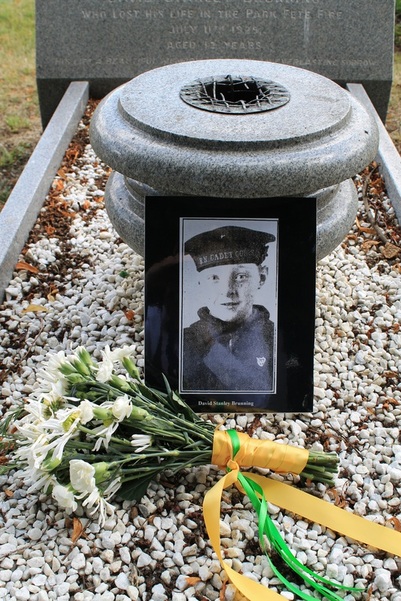 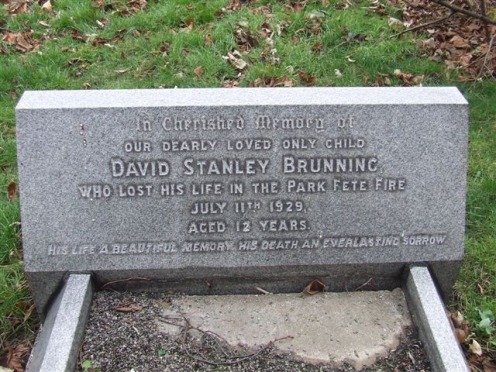 His parents David and Charlotte are buried with him. He was their only child.