Fireman Arthur John Tabrett
1883 - July 12, 1929 - 45 years old
One of the most experienced members of the Gillingham Fire Brigade 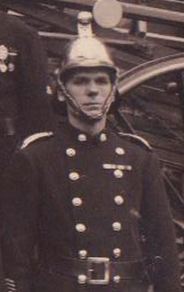 Arthur John Tabrett was the son of George Tabrett and his wife Margaret Stokes. He was born in Ashford, Kent. His siblings included: Eliza, Ernest, Phebe, Frank, Clara,  Charles and Samuel. Samuel Thomas Tabrett, husband of Agnes Thomson, was killed in the Great War in France on June 30 1915. He died of his wounds and is buried in the Hazebrouck Communal Cemetery there. Sadly Samuel`s wife Agnes had passed away nine months after their 1913 marriage at the age of only twenty four.

On April 17 1918 another one of Arthur's brothers, Earnest Tabrett, would also become a casualty of The Great War. Earnest was killed in action and is memorialized on the Ploegsteert Memorial in Belgium. Earnest had married Emily Davis in Medway in 1915.

Arthur's sister Phebe married Frank Leonard Smythe in Medway. In 1897 their son Leonard Earnest Smythe was born. Phebe sadly passed away in 1900 at the age of twenty six.

Arthur`s mother Margaret had passed away in 1925, his father George in March of 1929. Arthur was Uncle to Violet Tabrett and Leonard Tabrett. Arthur had served in the Royal Navy before the War, after which he settled down in Gillingham. During the war he was called up and after having served he returned to Gillingham.  He was a storekeeper in the coporation yard.

Arthur married Anne Lyddon in 1909 in Medway, Kent. Together they had two sons who were three and ninteen when their father died. The youngest son, Arthur G Tabrett was born in late 1925. Their older son, William John Tabrett born in 1910,  was his father's constant companion. William married Madge Gunn in 1931 in Medway and would eventually relocate to Malaysia (then known as Malaya) where he would work as a Government Officer and Madge as a fashion buyer. In 1957 the couple would return to Gillingham for a six month visit. They would stay at 46 Adelaide Street, the home his parents were living in when his father perished. Presumably his mother Anne would have still been living in their home at this time. Anne passed away in 1960 and is buried along side of Arthur.

Arthur was one of the oldest members of the Gillingham Fire Brigade. He had a record of 18 years in service.  He had also helped with this type of demonstration for many years in the past. He was playing the part of the "Bridegroom" in the demonstration. Fireman Tabrett lost his life trying to save a comrade.  Arthur did survive the initial fire and was conscious for some time. He did not make any statements regarding the fire. He died at St Bartholmew's Hospital at 6:30 pm the following day. Arthur was 45 when he died. His  coffin was carried to the cemetery on a fire engine. 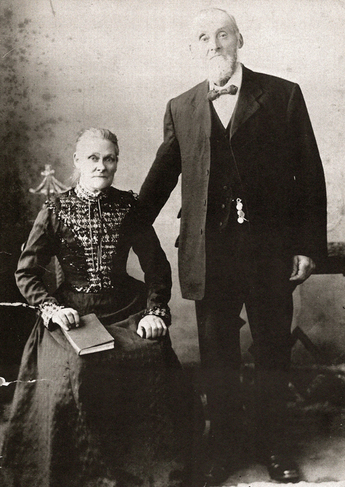 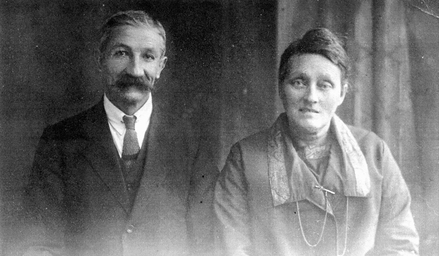 Arthur's brother Frank Tabrett and his wife Alice Irene Tippins c1940
They were married in 1918 and had three children, Rene, Nelson and Jack. 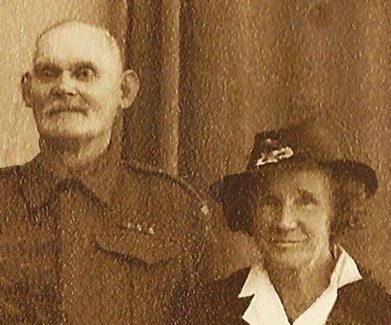 Gillingham Fire Brigade c1923
photo provided by the Kent Fire & Rescue Service Museum
Fireman Tabrett is pictured here in the front row, far right side. All three firemen who perished in this tragedy are in this photo, Fireman Tabrett, Fireman Cokayne and Fireman Nicholls. 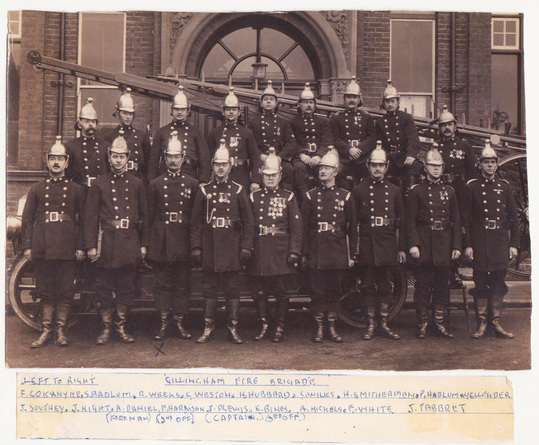 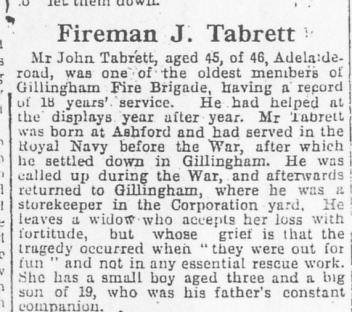 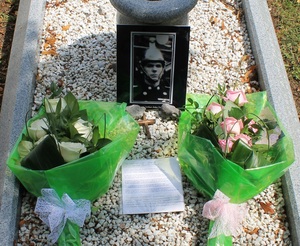 It was the summer of twenty-nine, the annual fete was doing fine,
The fire brigade was there that day to ‘wow’ the crowds with their display,
The ‘Fireman’s Wedding’ was the theme and Gillingham Park the tragic scene.

In years gone by this fine display had always capped the festive day,
They’d built the house, ‘Hot Villa’ named, three stories round a metal frame,
The ‘wedding party’ on floor three, were to be ‘saved’, by the firemen, you see.

To emulate fire, red smoke billowed out, firemen responded, strong men and stout.
But alas, in an instant, tragedy hit, the ‘house’ was aflame, the people still in it.
The fire was so fierce that no one survived, and fifteen brave soles ended their lives.

Firemen, Scouts and Navy cadets were all lost that day, and I’ll never forget,
That children perished, yes, there were nine, their lives cut short years before time.

Fireman Tabrett and Fireman Cokayne, attempting to save someone from the flames,
Both gave up their lives by going back in, brave heroes both, their loss, total sin.
But their names live for ever in the hearts of those here, names we will cherish, and always hold dear. 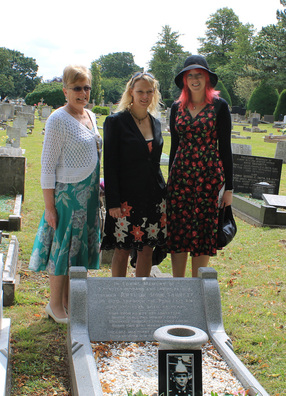 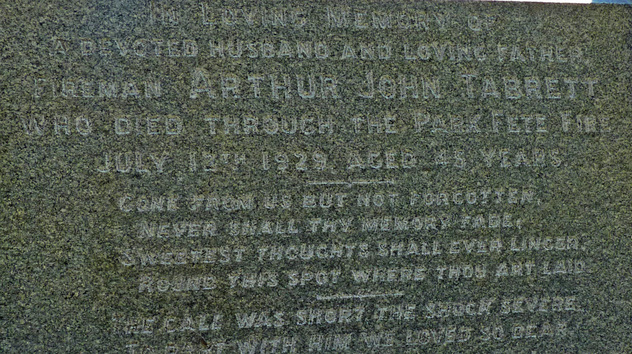