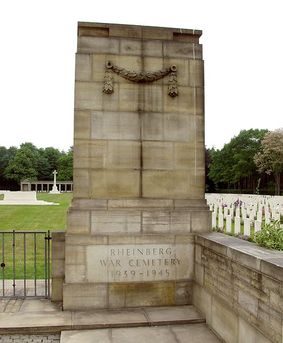 
Casualty of WW2 Kenneth Alan Barrett was the son of Henry John Barrett and his wife Emily Harrod. The family lived in Gillingham Kent. Kenneth was the youngest of Henry and Emma's three children, all sons. Kenneth's siblings were Harry J and  Reginald Henry Lewis Barrett. Tragically Harry died in 1920 at the age of two as the result of an accidental scalding. Reginald also perished tragically as a result of the Gillingham Park Fete Fire Tragedy on July 11, 1929.

Kenneth was a Flying Officer (Bomb Aimer) with the Royal Air Force Volunteer Reserve 158 Sqdn. He was a member of the crew of the Halifax HR758 NP-Y which took off 20:32 hrs the night of April 16/17 1943 from Lissett, detailed to bomb the Skoda Works in Pilsen, Czechoslovakia. The town of Dobrany was mistaken for Pilsen and a large asylum building was targeted instead of the intended Skoda Works.

Nothing was heard from the aircraft after take off and it failed to return to base. Its thought that the aircraft was attacked by a nightfighter and exploded in the air. The plane crashed near Saarbrücken. Killed were the pilot B. P. Jay who was found in the plane and Kenneth who was later found 300 yards away from the wreck. It appears that though he baled out, his parachute failed to deploy. The other were taken as PoW's.

16/17 April 1943327 aircraft - 197 Lancasters and 130 Halifaxes dispatched to bomb the Skoda armaments factory at Pilsen in Czechoslovakia. 18 Lancasters and 18 Halifaxes lost, 11.0 per cent of the force. One Canadian squadron, No 408, lost 4 of its 12 Halifaxes dispatched. This raid, took place by the light of a full moon but was not a success. In a complicated plan, the Main Force was ordered to confirm the position of the Skoda factory visually; the Pathfinder markers were only intended as a general guide. In the event, a large asylum building 7 miles away was mistaken for the factory and only 6 crews brought back bombing photographs which were within 3 miles of the real target. The Skoda factory was not hit. One report says that 200 German soldiers were killed when their barracks near the asylum was bombed.

Total effort for the night: 609 sorties, 54 aircraft (8.9 per cent) lost. The aircraft losses on this night were the highest so far in the war, exceeding the 50 lost on the 1,000-bomber-type raid on Bremen on 25/26 June 1942, but 14 of the aircraft lost from the Pilsen and Mannheim raids came down in the sea and a proportion of their crews were rescued