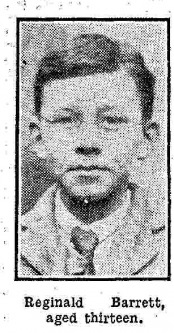 Reginald was the son of Henry John Barrett and his wife Emma Harrod. Reginald was born in Roachford, Essex. With the death of Reginald, his parents of 150 Shakespear Road, Gillingham had sustained the second shock of losing a child through a tragic accident. In 1920, another son, Harry J Barrett at the age of 2 had died in a horrific scalding accident.  Reginald was the oldest of  the three children, just 13 years old when he died.  His parents were left with a six year old son, Kenneth Alan Barrett. Sadly Kenneth would also perish at a young age. He became a casualty of WW2 on April 16, 1943 at the age of 20. Kenneth was a Flying Officer (Bomb Aimer) with the Royal Air Force Volunteer Reserve 158 sqdn.

Mr. Barrett was a wardmaster in the Royal Navy and at the time of Reginald's death was on night duty in the Naval hospital located close to Gillingham Park.  He was called to the park and during the search in the darkness had the horror of discovering his son's body amongst the debris.

Reginald had only joined the Medway Association only five weeks before his death. He had always been a boy full of zest and was keen on sports.  He was a pupil at the Country School. 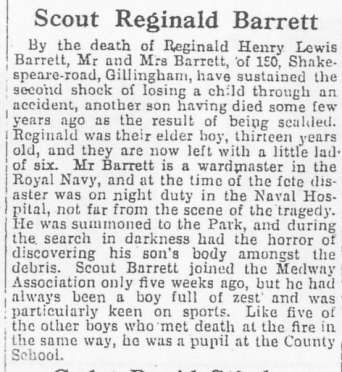 Flowers left on Reginald's grave by the 5th Gillingham Scouts 10th July 2011 during the Commemoration Service, wooden cross made by Phil Oschefski of Canada, placed by his daughter Lori Oschefski 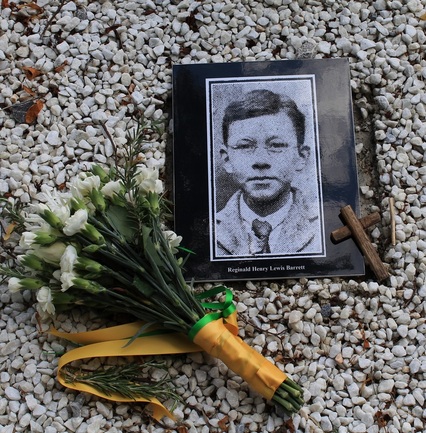 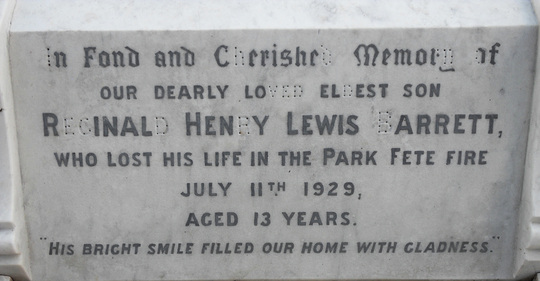 What remains of Leslie Neale's marker wrongfully rest on his grave