Construction of the mock house
The venue for the sad and tragic event you are going to read about here was Gillingham Park, Gillingham, Kent, England.  For many years the highlight of the summer for local residents was the annual summer fete.  Lasting for a couple of days, it also acted as an important fund raiser for the local hospital, St. Bartholomew's.  On the last day of the fete the local fire brigade would enact a wedding ceremony with two firemen dressed as a bride and groom.  They would have fun mingling with the crowds for the day, collecting donations for the hospital and in the evening they, along with other "guests" would retire back to their home for their "wedding reception".  The guests were comprised mostly of young Naval Cadets, Sea Scouts and some firemen.  The "house" was a simple mock up with three stories lashed together using timbers and a canvas tarpaulin for walls.

The grand finale of the fete was a demonstration of the prowess and skills of the fire brigade as they rescued all of the guests from the house after it mysteriously catches fire.  Safety equipment such as hooks and slings were placed in strategic locations and a fireman was charged with the task of lighting smoke fires to simulate the fire.  He would then make his way to the top of the building and sound the alarm to signal the rescue.  The boys would wave their hands and cry for help. The escape equipment would be released and the fire brigade, waiting near by would rush in from both the front and rear of the building to rescue the occupants.  Once the house was safely emptied of its guests, flammable substances already in place on the first floor would be lit.  In an exciting and well anticipated finale the house would go up in flames for real.

On Thursday, the 11th of July 1929, this well-rehearsed demonstration went tragically wrong. Inexplicably the fire had began on the first floor. The fire fiercely shot upwards blocking all the exits and trapping the occupants inside - nine of them children, young boys between the ages of ten and fourteen.  At the first sight of the flames, the spectators, not realizing the fire was real, laughed and applauded as the boys cried out desperately for their lives.  The fire brigade realizing at once the fire was real leapt into action. The crowd applauded more, still thinking this was part of the show.  Little six year old Molly Cheesman, sister of Eric Edward Cheesman - a Naval Cadet inside the house, and her mother Elizabeth were in the crowd.  It was Molly's frantic and desperate screams which first alerted spectators that something had gone horribly wrong.  "Eric's burning, Eric's burning" was her cry heard above the crowd's sounds of merriment.  Others in the crowd only realized the horror unfolding in front of them when they saw figures leaping from the building in flames.  A search light was shone onto the building and by its light the people saw two of the boys leap from the building.  Eye-witnesses, even forty years later, vividly recall the horrific sight of a burned body of a boy half hanging over the edge of the roof, illuminated by the search light.  Many relatives of the victims were present in the crowd and could only helpless watch as their love ones perished in this terrible inferno.

Mrs. Olive Searles saw her ten year old son Leonard throw up his arms and die amid the flames. "I know he's gone, I know he's gone" were her cries.  Mrs. Mable Mitchell and her five year old daughter Vera both witnessed Vera's father Royal jump from the burning structure in flames and run, burning, to a trough of water and plunge into it.  He died an agonizing thirty hours later in hospital, Mable never leaving his side.  Mrs. Lottie Brunning watched as her only child, twelve year old David perished in the fire.  Mrs. Sindon, a widow, watched as her son, eleven year old Ivor, frantically screamed for help before slipping back into the fire which claimed his life.  Gordon Winn raced to the park upon hearing that his thirteen year old son Leonard had been injured. "I raced to the scene of the fete in my car.  My little boy, his clothes burnt and still smoldering, lay on the ground.  The poor little fellow could hardly see.  He was terribly burned.  I lifted him gently and placed him in my car, then raced along the road to the hospital.  All through the night I sat by his bed side. He was so brave - oh so brave."  In agony and blinded by his burns Leonard asked his father to sit on his bed beside him.  This heroic and brave little boy could only think of the others. "Daddy, how are the other boys" he asked "Did they get away?" Concern for the other boys would occupy his thoughts right up until the moment of his death the following morning at 4:45 am.

Fireman John Tabrett who had participated in the event, ran back inside the burning structure in a futile effort to save the victims. In the words of Chief Officer Frederick White, Fireman Frances Bull Cokayne could have saved himself, but he considered it his duty to try and save those trapped.  These two heroic and brave firemen, without a single thought to their own safety, tragically gave up their lives for the others trapped in the structure.  Fireman Cokayne was  seen jumping from the burning structure with a boy tucked under each arm. In his dying words, Leonard Winn told his father that he was on the top of the dummy house with Fireman Cokayne when the fire engulfed the structure. He stated that the heat was terrible and that it was impossible to descend the structure.

Despite the valiant and heroic efforts of the fire brigade, police, St John Ambulance and many others who were present, all fifteen people including the nine children, who had participated in the demonstration perished in the fire - burned alive in front of a crowd of hundreds of spectators which included many of their family members.  The few that initially survived the fire would sadly succumb to their injuries soon after. 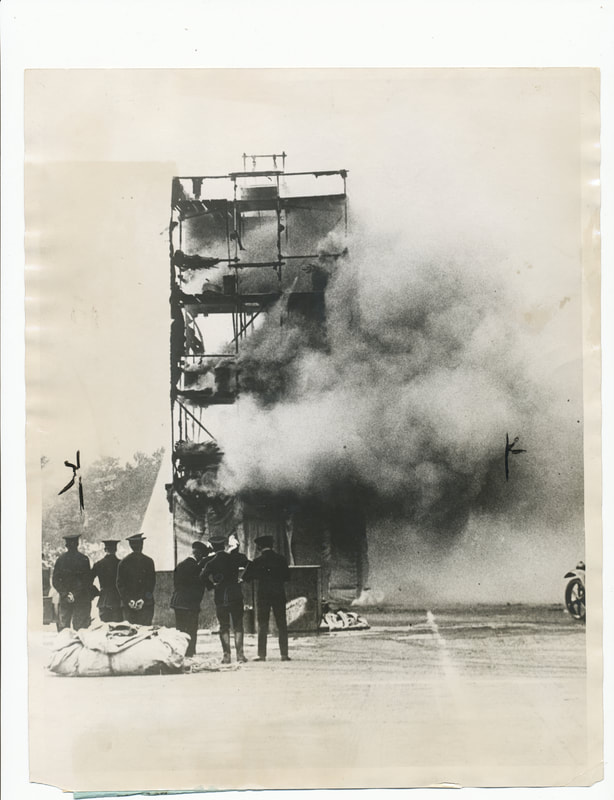 This photo is of the actual Gillingham building, still smoldering. With respect, for the 90th Anniversary of this fire, Lori Oschefski has now released the photo through Kent newspaper reporter Peter Cook. The photo was purchased by Ms. Oschefski through an United States auction of vintage photos. In Nottingham Evening Post 12 July 1920, Leonard Winn's father stated that in his son dying words, Leonard stated he was at the top of this structure with Fireman Cockayne when this structure was engulfed in flames.

The Victims of the Gillingham Fire Demonstration

The graves of these victims had been left uncared for and had fallen into serious disrepair over the years. No public memorial existed. The memory in the community, of this tragedy and these lost lives, was fading away to nothing.  As  result of a campaign launched and led by Lori Oschefski of Barrie, Ontario, Canada, in March of 2010,  the Medway council restored the existing graves and erected a memorial  in the Gillingham Park to honor and remember the fifteen lives lost and the tragic event which took their lives. This beautiful new memorial was unveiled in an emotional unveiling ceremony on the 10th of July 2011, the eve of the 82nd anniversary of the tragedy.

Each year on the anniversary of the tragedy, the 5th Gillingham Scouts visit the monument, leaving flowers
​in remembrance of the victims. This is their Monday July 11, 2016 flowers.
​Photos by Snowy Ellson, Grandson of John Thomas Nutton. 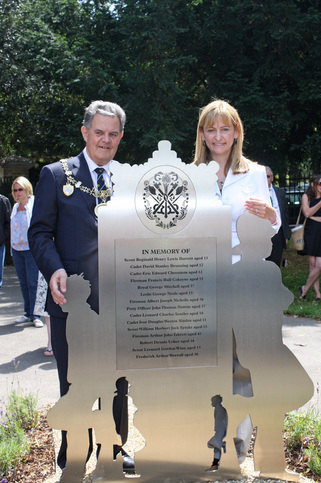 Currently in the news:

Remembering one of the towns darkest days
The Medway News

On June 6th 1944 two B-26 Marauders on route to France suffered a mid air collision and crash in Gillingham, Kent. The crew of both planes perished as well as four civilians on the ground. Less the half an hour later two more B-26 Marauders from the same squadron suffered the same type of accident over Battle, Sussex. Only the pilot of one plane was to survive.