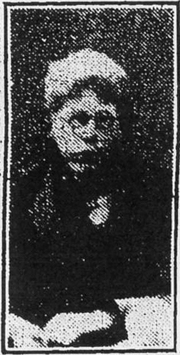 William Herbert Jack Spinks (called Jack) was the only son of Herbert Cecil Spinks and his wife Amy Tuxill. Herbert had lost a brother, Percy Reginald Spinks in the Great War. As both their parents were deceased Herbert was listed as Percy's next of kin on his war records. Herbert died in 1973 in London, England. Amy died in 1968 also in London, England. Jack had one sister Dorothy (also known as "Jill") who was born in 1918 in Medway.

In 1929 the family had been living at 61 Seaton Road in Gillingham. Mr. Spinks worked as a garage attendant. The Spinks family was just moving to London when the tragedy happened. Jack's heart was broken knowing he was soon to be parted from his very best friend Robert Usher.  The two boys were more like brothers and were inseparable.  They were found together at the bottom of the ruins of the tower after the fire.  Said Mrs. Spinks ""The were both terribly upset but now they have gone together they will always be pals" Mr. Spinks identified his son's remains. Jack's coffin was carried to the cemetery on a fire engine. 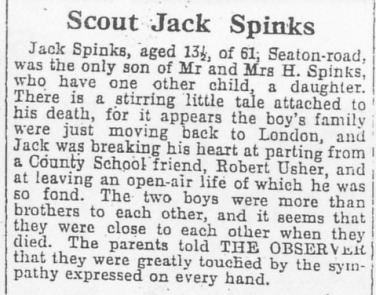 Flowers laid for William on his grave by a parish member of the St. Augustine's Church during the Woodlands Cemetery Commemoration Service
Wooden cross made by Phil Oschefski of Canada, placed by his daughter Lori Oschefski 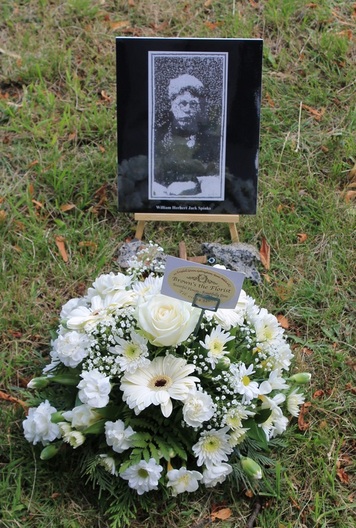