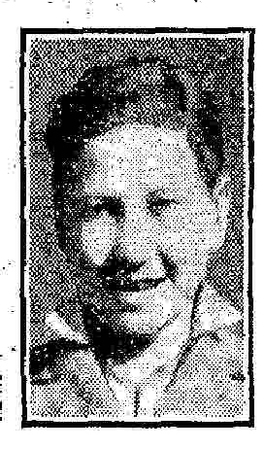 Robert Dennis Usher was the son of Charles Robert Usher and his wife Catherine Susannah Tulley. Robert was the youngest of their children.  His siblings included Kate Winifred, Herbert Leslie, Ronald, Daisy Maud, and Ellen S. Charles was a Lieutenant in the Navy (retired in 1929) and in 1901 was working aboard the H.M.S. Wildfire which was docked in Kent. Catherine and Robert were married in 1901.   In 1911 the family was living at 10 Watling Street in Gillingham. Catherine passed away in 1926, three years before the death of Robert.

Robert`s sister Winifred married Lawrence Howell in 1931 in Medway, Kent. She passed was in 2005 in Worthing, West Sussex. His brother Ronald married  Euphemia Howe in 1937 in Medway. He passed away in Chathem in 1986. Daisy married Frank Amies in Medway in 1928. She passed away in 1992 in Haverfordwest, Wales.

Mr. Usher had no idea that his son had attended the fete that night. He and his daughter were away for the day and when they returned home shortly after 10 pm Robert was not in his bed. They thought he was spending the night with his good friend Jack Spinks.  This was nothing out of the ordinary for him to do so so they were not concerned.

Jack and Robert were had been devoted and inseparable friends. Both had been terribly upset when they learned the Spinks family was to be going to Shepard's Bush to live.  The Usher's were living at Airmyn, Marshall Road Rainham. Robert attended the county School for Boys.

Shortly after midnight that night Mrs. Spinks arrived at the Usher home telling them that her son had perished and there was no news about Robert.  The news that his son was missing was a devastating shock.  In his words "My daughter and I were in Folkstone all day and we did not know that my boy had even gone to the fete.  When we returned home, soon after 10 pm and did not find him in bed we thought he was spending the night with his great friend Jack Spinks. It was nothing out of the ordinary for him to do that and we were not alarmed until soon after midnight when Mrs. Spinks came to tell us that her boy had perished and that no one knew anything about my boy.  When I first saw the bodies I could not recognize Robert.  Later I recognized him by a piece of clothing, he was neither a scout nor a cadet and had been wearing plain clothes.  He was the type of lad who would be first in rushing into every type of adventure, and was always keen on joining in with everything other lads did." Mr. Usher could not recognize his son at first, identifying him finally by a piece of his clothing. His body had been burned beyond any hope of physical recognition.

Said Mrs. Spinks of the friendship of Robert and Jack and the impending separation " Both of them were terribly upset by now they have gone together they will always be pals". She had also said the his death was a "mysterious working of God". Robert and Jack's bodies were found together in the rubble from the burning house. Robert's coffin was carried to the cemetery by a fire engine. 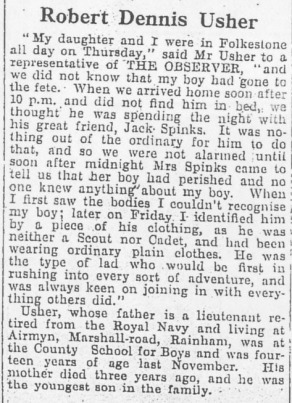 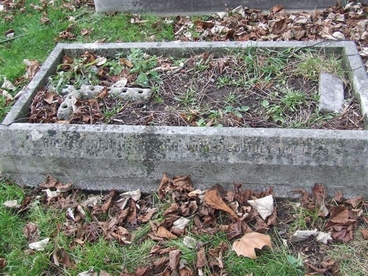 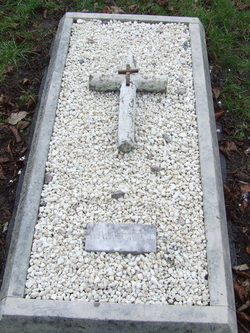 The small piece of masonry found at the foot Robert Usher's grave  is from the grave of Frederick Worrall.  The upper photo was taken in January of 2010, the lower in February 2011 after refurbishment. 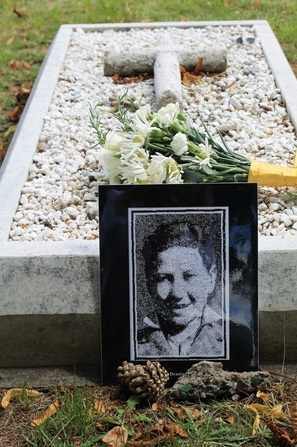 Robert's grave with flowers placed by the 5th Gillingham Scouts during the Woodlands Cemetery Commemoration Service of July 10th 2011
Wooden cross made by Phil Oschefski of Canada, placed by his daughter Lori Oschefski