Leslie George Neale
1916 - July 11, 1929 13 years old
A popular boy at school and a scholarship student at the County School 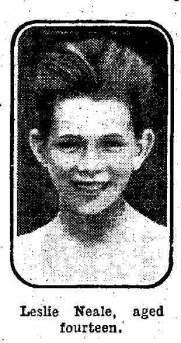 Leslie George Neale was the son of William Alexander George Neale and his wife Cicelia Bishop. The family resided at 157 Canadian Avenue.  Leslie was a "sporting" boy, popular at school and among the many organizations in which he was a willing helper.  He was one the party of six County School boys who went together to the fete.  Leslie was a clever child, he won a scholarship at Portsmouth from where his family came from a few years ago. After moving the Gillingham he won a scholarship to the County School.  He was interested in every form of study, particularly in science and botany.  He often found assisting the curator of the Gillingham Museum.  Leslie was the much loved brother of  Cicely, Gladys, Roy, Eric and Lawrence.  Leslie was the eldest son in the family with ten years between him and his youngest sibling.  Leslie's brother Alan died in Medway in 2004 at the age of 81.

Mr. and Mrs. Neale were going to bed when they heard the news of the fire, their informant asking if their son was at home.  Mr. Neale searched for his son for hours before he found him in hospital. Leslie remained unconscious  until his death.  Leslie had been one of the boys who had jumped from the burning structure.  Though he had jumped from a fair height not a bone was broken. His heart broken father, said " I know no details of the actual catastrophe. I was not there. All I know is that I lost my dear boy. I tired to dissuade him from going but he was always a reckless little fellow. They say he must have escaped by climbing hand over hand down a rope, but it was useless. He died."  His father also said that Leslie was a volunteer and need not have been there. Leslie's death was caused by his burns. His body was carried to the cemetery on a fire engine.

Leslie's family had been told after his death that he has survived the initial fire but that he had run back inside to try and save a friend. Leslie showed great courage and his bravery and courage should always be remembered. 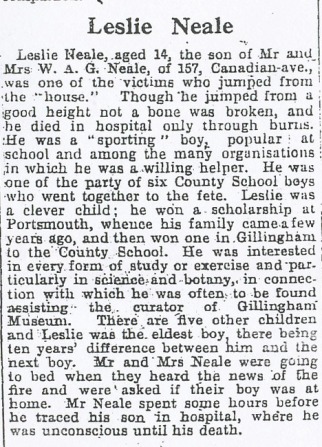 Flowers left on Leslie's grave by his family during the July 10th 2011 Commemoration Service. Small wooden cross made by Phil Oschefski of Canada and placed by his daughter Lori 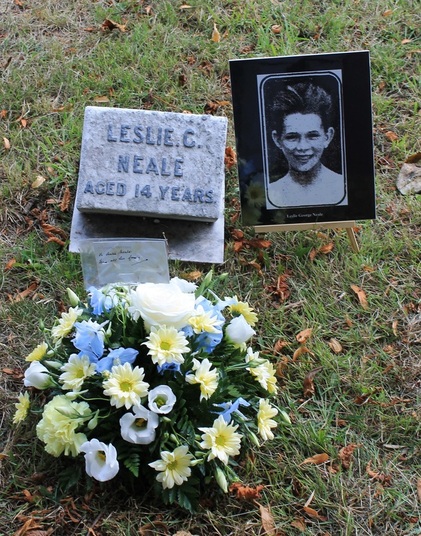 "The nephew and nieces of Leslie G.Neale, wish to remember this brave young boy. He risked his life to save his friend but was unsuccessful. We are pleased he and the others are being remembered in this way" 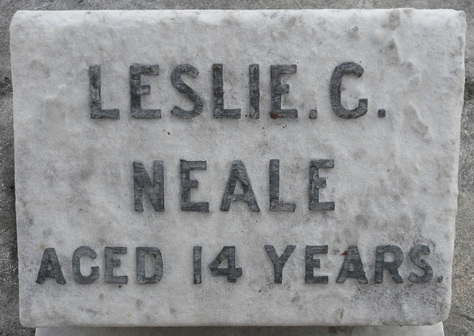