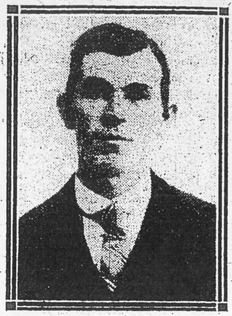 Royal George Mitchell was born in Kent in 1892.  Royal was often referred to as "Ronald" or "George" by his family and friends.  He was the son of William George Mitchell and his wife Bertha. His siblings included Walter, Merlin, Ella, Robert, Bertha (died as an infant) and Mabel.  Royal married Mabel Dives in 1916 and their daughter Vera was bon in 1923. Ronald was playing the part of the "clown" at the fete that afternoon. Prior to the war, Ronald was a member of the Fire Brigade. Afterward Royal would always join in with the brigade when they were participating in local events. He was good friends with Mr. Worrall and Mr. Tabrett who also perished in this fire. The year prior to their deaths they had gone around with a barrel organ to collect money for the Firemen's Widow and Orphans Fund. Royal worked as a lorry driver. Previous to this he had worked as a laborer for the council. The family lived at 105 Imperial Road in Gillingham.

His wife Mabel and five year old daughter Vera were both in the park the night of the fire and saw Royal, in flames, jump from the burning structure.  He ran to a trough of water and plunged into it.  He was taken to the St Bartholomew's Hospital where his wife Mabel kept a thirty hour vigil at his bed side. In spite of his terrible injuries and burns to he did speak to his wife from time to time. In his thoughts was his good friend Mr. Worrall. He asked his wife if Mr. Worrall had escaped. Mabel did not have the heart to tell him that his  friend had been burnt to death. Royal was suffering from burns to his face, hands, forearms and both legs. He died at 3:35 am on Saturday the 13th of shock. Royal's father-in-law William Dives would identify his body.

Mrs. Hills, a close friend of the family's was interviewed by the Daily Express. "Others at least know the worst, but we are in terrible suspense. Mrs. Mitchell is at her husband's bedside at the hospital hour after hour, watching and waiting, hoping against hope.  Mr. Mitchell was a friend Worrall, the bride in the mock wedding.  He kept the crowd in roars with his antics.  There was no need for him to have climbed on that building.  That is the awful part.  Mrs. Mitchell and I were at the fete together.  He was killed before our eyes"

Royal was the last of the surviving victims to pass away. Royal's coffin was carried on a Fire Engine to his grave. 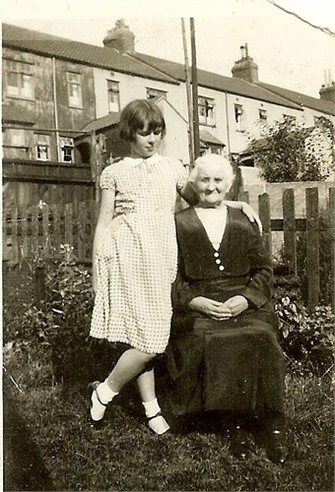 Royal dressed in his clown costume c1928
"He was good friends with Mr. Worrall and Mr. Tabrett. The year prior to their deaths they had gone around with a barrel organ to collect money for the Firemen's Widow and Orphans Fund. 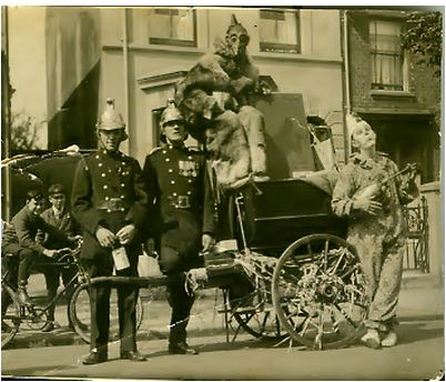 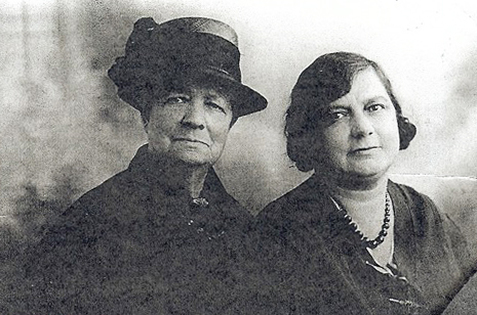 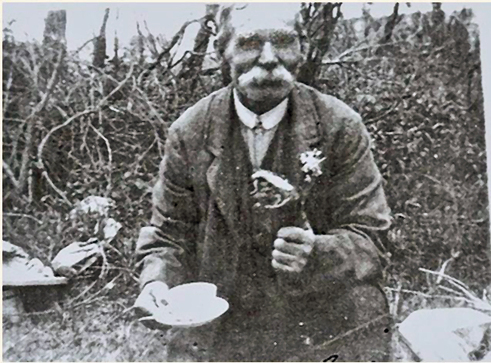 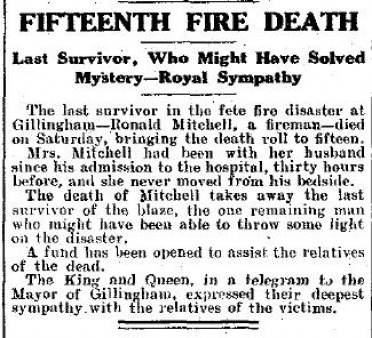 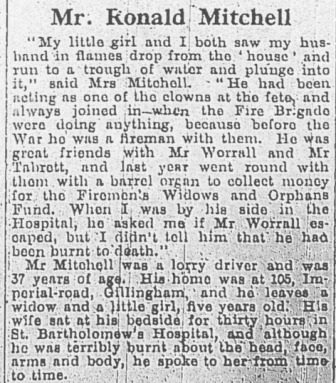 Royal's grave after the July 10th Commemoration Service, flowers placed by the Kent Fire and Rescue Services, North
Kent Group. Royal was a former fireman at the time of his death.
Wooden cross made by Phil Oschefski of Canada, placed by his daughter Lori Oschefski 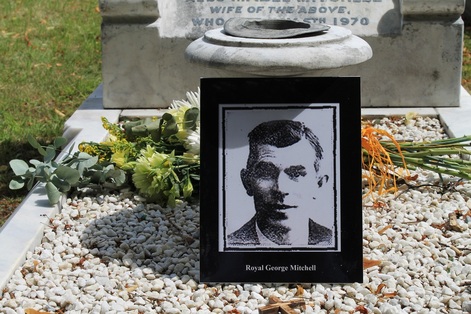 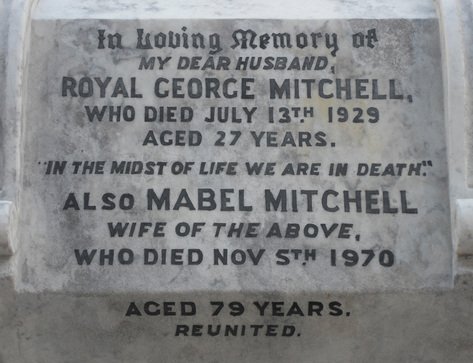 Royal's wife Mable who sat thirty hours at his bedside before his death was buried along side of him in 1970. Royal's inscription incorrectly states his age as 27. He was in fact 37 when he passed away.