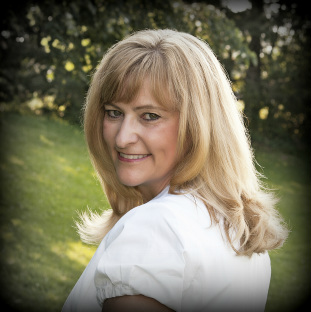 In early 2010 after hearing the apologies the Australian and British Prime Ministers made to the British Home Children it inspired me to search for my Grandfather William Cheesman’s family. He was one of five children orphaned in London England in 1891 after the sudden deaths of their parents William and Ellen Cheesman. William, Rose, Matilda, Edward and Mary were torn apart by the loss of their parents and would never see each other again. William was taken in by the Dr. Barnardo Homes and eventually sent to Canada to begin a new life as a farmer in the West Coast. My grandmother Annie Rita Marion Prince came to Canada in 1912 as a bride. They married the day she arrived. The family’s story may be found at this link entitled "The Ironic Life of William Cheesman" written by myself and published in 2009 by the British Home Children's Descendents. The pain of William's loss would haunt him the rest of his life.

I had been able to trace William's brother Edward to Gillingham England, to his marriage to Elizabeth Florence Jackson and the birth of their two children Eric Edward and Molly. Inspired I continued the search with Eric with hopes that I would find surviving family members with whom to share my story. Sadly this was not to be the case. Eric would perished in this tragedy and his heartborken family would never recover from this incident. Edward became very ill and died four years after Eric's death. Elizabeth never recovered from these deaths, she needed constant help and care to cope. Following Molly's marriage in 1946 the family would leave the area for good. Elizabeth remained close to Molly until her death in 1968.  Molly and her husband Leslie Gordon Blomfield had only one child Hiliary. Hilary was born with Cerebral Pasly and in spite of her challenges would become a school teacher in Kings Lynn, Norfolk where they family had moved to. In 1982  Molly's husband Leslie died. In 1985 Hiliary suddenly fell ill one day and sadly died the following day. Hilary had never married and did not have any children. Molly passed away shortly after her death. Molly never forgot what she saw in the park the night her brother Eric perished. She had shown signs of the strain and heartbreak of this her entire life. There is no one left in my Great Uncle Edward's immediate family to carry on their memory, so I shall honor them by doing so.My mother, Muriel Oschefski (born Olive June Cheesman) had come from a family of eight children, two which were born from her mother's second marriage. The initial first five were born in Canada. Mom was born in 1922 in Lingen Herefordshire  after the family had returned to England.  Shortly before her birth her parents marriage would dissolve. Annie and the children would spend the next two years living in the Kington Union Workhouse in England, unknowingly very close to her where her first cousins Eric and Molly lived with their parents.  Ironically, like their father William, mom and her siblings would also be sent to Canada as British Home Children and placed for adoption in Ontario. This would make Mom's siblings Candian born British Home Children.

Mom was adopted by a wonderful couple, Jenn and George Elder and enjoyed a wonderful childhood. She was lovingly cared for and would became a nurse shortly before she married Phil Oschefski in 1944. Together they raised a family of nine in Orillia, Ontario.  I am their seventh child.  I continue to live my life not far from Orillia and have raised three wonderful children. Sadly Dad passed away in 2002 but mom, at eighty-nine years of age still continues to live an active independent life and enjoys her children, fourteen grandchildren, seven great grandchildren and two great great grandchildren.

With the help of many people including Geoffrey Gillon, Dorothy Phillips, Alan William Collins, Robert Wilkinson, residents of the Gillingham & Chatham communities and members of the victims families, I was able to compile the information found on this web site and successfully campaign for the restoration of the graves and the beautiful new memorial which stands in the Gillingham Park. With the help of the Medway Council and Elaine Nutton, I organized the unveiling ceremony for the new memorial which took place on July 10, 2011 in the Gillingham Park.

Many thanks to everyone who supported this campaign and signed the petition! These 15 lives and their story will now be remembered for all time.
My adopted Grandparents Jenn and George Elder 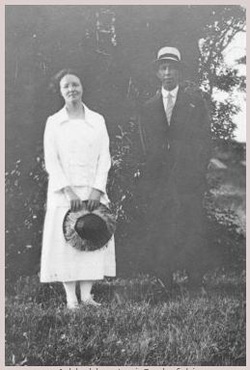 1915 in Rosetown, Saskatchewan, Canada
My biological grandparents William and Annie Cheesman
with baby Ralph and Archie 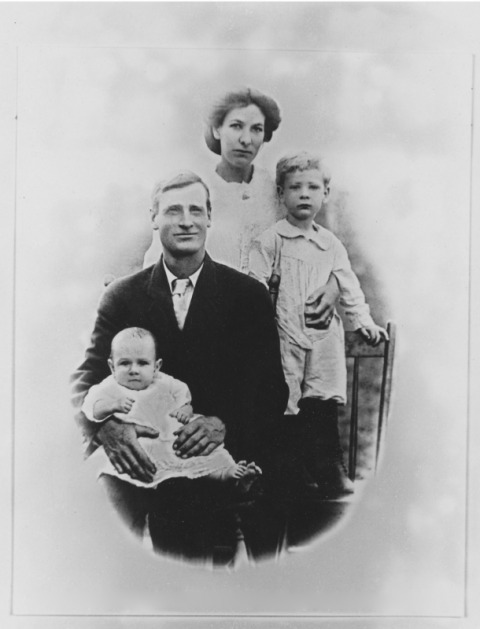 1930 Garden Party
Molly Cheesman -the tall girl on the right hand side of this photo. Childhood friend Dorothy Phillips in the foreground. The boy in the back - Lewis Sears, girl behind Dorothy's right shoulder - Dora Button 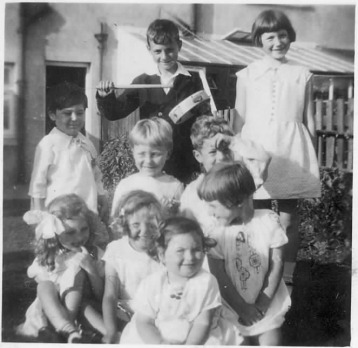 The Winter 2010 article which was published in The Kington Chronicle
about my trip to Lingen, where my mother was born 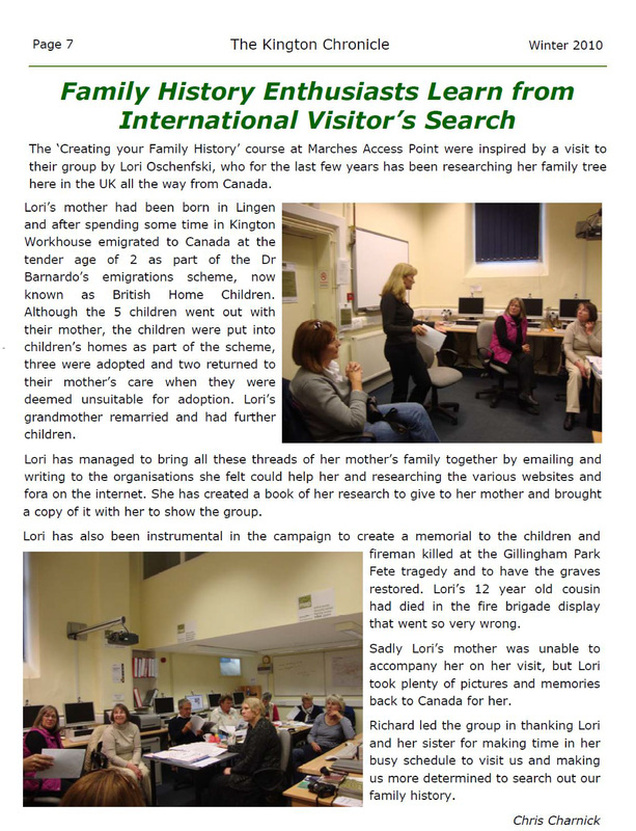 The nine Oschefski kids
lined up in chronological order
c1965 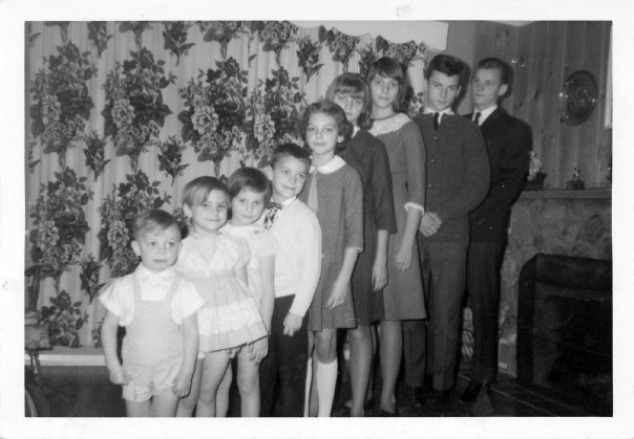